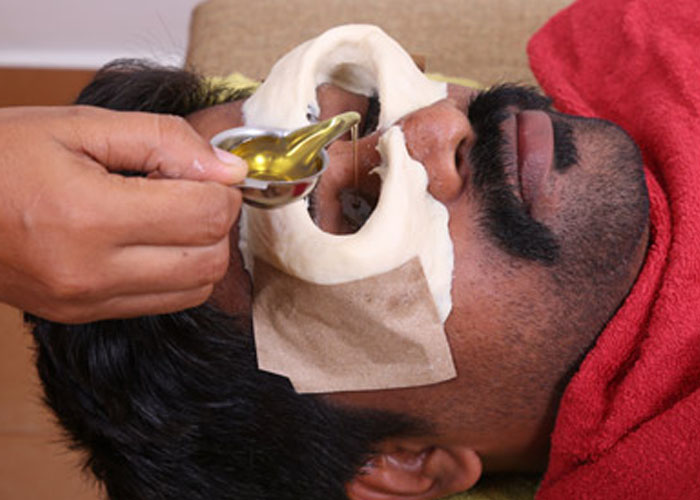 Vaidhyamana Ayurveda hospital in Ernakulam gives special treatment for ear, nose and throat disorders and has a separate clinic. With special panchakarma treatment in Kochi from Vaidhyamana get recovered fast.

Ayurveda has a separate branch for ear, nose and throat conditions, its detail description with Medicines are mentioned in Salakyatantra one of the branches of Ayurveda. In this text ancient scholars had mentioned almost all the disorders mentioned in modern medicine and there respective herbal formations, there are special panchakarma techniques and external therapies which can cure those mentioned disorders. Ayurveda considers nasyam (erhine therapy) as the most important panchakarma therapy for nose.

Most of the disorders occurring above chest (head & neck) There are different treatments for head mentioned by ancient scholars to nourish the nervous system by maintaining an equilibrium for the nervous conduction. At Vaidhyamana we specialize on…(incomplete sentence) According to Ayurveda eye is one of the important indriya (sense organ)of jatroordha (above the neck). Special ayurvedic treatments are well described to protect this indriya from ailments

In Ayurveda’s detailed discussion of the eye, with disease-causing factor, pathology and treatments are mentioned in salakyatantra Special ayurvedic panchakarma procedures give complete cure of diseases and healthy functioning of the eye. Along with panchakarma special ayurvedic procedures like netratharpanam, putapakam, sekam, Dara, Shiro Pichu, sirovasthi, Siro Dhara, anjanam, aschyothanam are mentioned along with specially prepared natural medicines and diet regime According to Ayurveda pitta dosha controls the activities of the eye. Any vitiation in the function of this dosha will lead to a disease condition. This could be due to deviation from its normalcy in the form of increase, decrease or blockage of channels. Along with pitta dosha, the other doshas Vata and Kapha get vitiated resulting in various eye diseases

Special panchakarma procedures like nasyam and virechanam give maximum results with zero side effects In Ayurveda the holistic science recommend specific measures both in diet and activity which will maintain the doshic balance and keep the state of arogya (health).